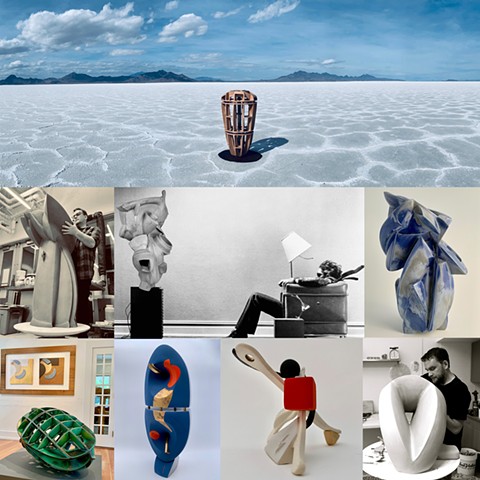 "My favorite thing about simplicity is when it disguises itself as complexity, one can often coax the simplicity out of the complex because it is so damn playful."

I was raised in the Salmon mountains of northern California, that rural upbringing is very likely the reason I would eventually live and study abroad for over 12 years. I first apprenticed with a painter/sculptor outside of Bangalore, India in 1996. It was there I was introduced to wood firing, not necessarily as an aesthetic choice, but as the most readily available fuel source. Learning to fire in a wood kiln before gas and electric kilns is the inverse method most clay artists learn to fire their work. I think that helped me identify equally with all firing methods depending on what I wanted to convey in the artwork. After leaving India I moved to Hangzhou, China to continue my undergraduate study and work in a ceramic studio there. I returned to the US after many years abroad and worked for 3 years in the art studio at UC Berkeley where I was introduced to the American ceramic tradition. That’s when I fully realized that up to that point, I had been trained in regional pottery traditions of India and China. Feeling that I was an outsider to my own “American ceramics” tradition, I had to acclimate myself to a new artistic culture. I left Berkeley for Ithaca, NY in 2006 to teach Arabic and wheel throwing at the Cornell University pottery studio. Ithaca was where I discovered the renowned ceramics program at Alfred and took 2 courses in glaze calculation there. Through my exposure to the ceramic art scene in Berkeley and Alfred, my work eventually began to transition from sculptural pottery to sculpture. In 2007, I began an artist residency at the Cub Creek Foundation in Virginia to focus on wood firing my sculptural work. I then spent 3 years as Chris Gustin's studio manager, focusing heavily on glaze formulas that would highlight the edges on my geometric forms. I earned an MFA under the guidance of John Balistreri in Bowling Green, OH. There I focused on contemporary art history and the mathematical equations behind my sculptural forms. I have spent the last couple of years as an artist-in-residence in the UK and the Netherlands. Presently living back in northern California, I am currently focused on creating sculptures at a more intimate scale. I most recently received an honorable mention at the Gyonggyi International Biennale in Korea and I am in the permanent collections of the Yingge Ceramics Museum, the Fuller Craft Museum, the Crocker Art Museum, and the Kamm Teapot Foundation.